This past Saturday I was invited by fellow blogger Georgina to attend an event at Catalyst in Cambridge. This event was run by Elizabeth Santos for Hawaiian King Bread. The meals were prepared by Chef William Kovel using King’s Hawaiian products. Courtney Taira of King’s Hawaiian was there to talk about the company and their products.

While sipping our mimosas Georgina and I mingled with the other attendees. I met some food bloggers as well as people who just appreciate good food.

Andrew from http://www.americastestkitchen.com/ outfit from Macy’s

Michelle from http://www.theeconomicaleater.com/ outfit from Old Navy and H & M

Pat from http://hungrytravelers.com/ outfit from J Jill and Macy’s 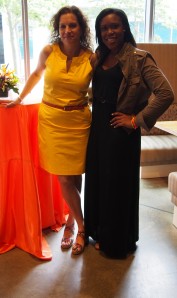 Catherine wearing a dress from Macy’s 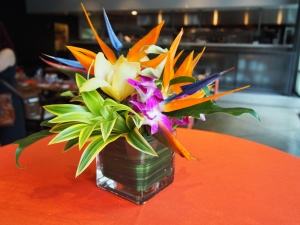 We enjoyed passed hor d’oeuvres including: 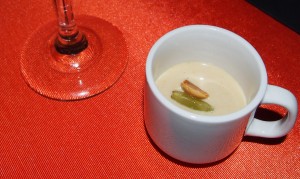 I enjoyed hearing Courtney’s story about how her grandfather started the Hawaiian King’s bread business. She also talked about how the company decides to collaborate with other companies. 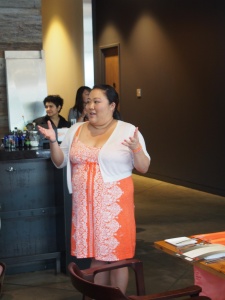 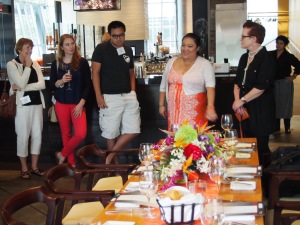 Here is Courtney’s bio provided in the media kit I received:

Courtney Taira, granddaughter of King’s Hawaiian founder Robert R. Taira, has fond memories learning about the King’s Hawaiian family business as early as age six, when she started helping out during the busy holiday seasons. Courtney now serves as principal spokesperson and lead consumer care manager for King’s Hawaiian. She thoughtfully and personally responds to consumer questions and comments.

Courtney spreads Aloha Spirit with everyone around her – sharing true Hawaiian hospitality and treating everyone as King’s Hawaiian ohana (or ‘family’ in Hawaiian).

Strong family involvement has played an important role in the success of King’s Hawaiian. Courtney is a part of the third generation upholding her grandfather’s uncompromising commitment to quality. Prior to creating the King’s Hawaiian consumer care team, Courtney worked in nearly every department at King’s Hawaiian including finance, accounting, marketing, logistics, as well as working at King’s Hawaiian Bakery & Restaurant, and The Local Place restaurant.

Courtney graduated from the George Washington University. She has studied abroad at Universidad de San Andreas in Buenos Aires, Argentina, and is currently studying Culinary Arts at The International Culinary School in Santa Monica, Calif.

Here is some product information provided:

King’s Hawaiian Original Hawaiian Sweet rolls and bread have been making everyday occasions special for 60 years. Irresistibly delicious, soft and fluffy, with just the right amount of sweetness, they are the only authentic Hawaiian Sweet rolls and bread, crafted from the original Island recipe, with an
uncompromising commitment to quality and Aloha Spirit. You’ll find us in grocery stores everywhere, most often in the deli section or in-store bakery. 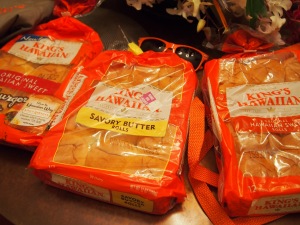 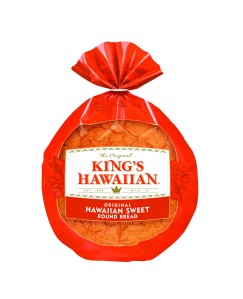 We sat down to lunch at beautifully decorated tables next the open kitchen. We were served a glass of wine with our meals. I choose a lovely pinot noir. 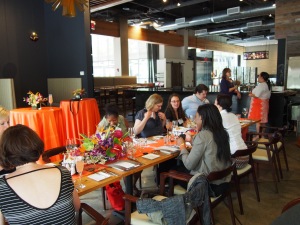 Our first course was a Seared Ahi Tuna Salad with Local Greens, Tomato, Cucumber, Sheep’s Milk Feta topped with Black Olive Tapenade and King’s Hawaiian Crostini. I enjoyed this salad very much, the flavors all worked well together. The tuna was perfectly prepared.

For our second course we had a choice of three dishes. 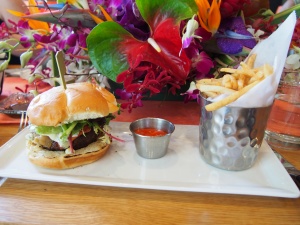 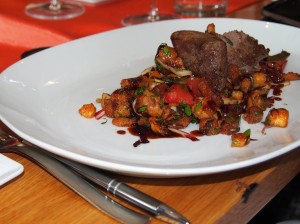 I chose the burger and it was mouth-watering. The burger was cooked to my liking, medium rare and the combination of cheese, onion, and King’s Hawaiian bread was delectable.

I also tasted the lamb dish which was also delicious. Chef William Kovel knows what he is doing in the kitchen. We were able to watch him prepare our dessert, King’s Hawaiian White Chocolate Chip Bread Pudding with Caramel Sauce. 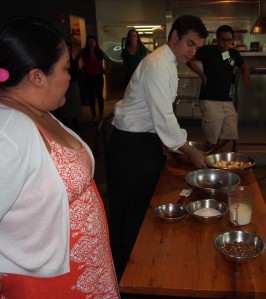 I’m glad I saved a little room for this course. Dessert was the perfect combination of bread pudding, vanilla ice cream, and caramel sauce.

Upon leaving we all received a gift bag filled with King’s Hawaiian products, sunglasses, recipes, a tote bag, and an apron. 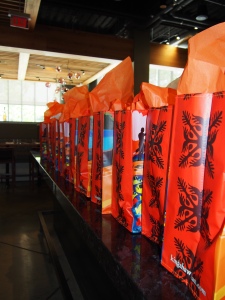 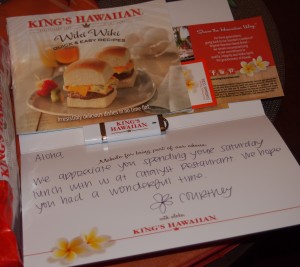 I would recommend dining at Catalyst. Check out their website for more information. They have plenty of space for private parties and events as well as a great menu and wine selection.

My Tweets
Follow Lifestyle of a Fashionista on WordPress.com